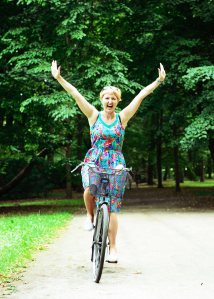 But here is what I can tell you!

One sunny day in Jerusalem I was talking with Asaf, half-Israeli half-British friend of mine. Asaf was telling me his story, how he kept moving from one place to another, when eventually I’ve heard “Sevilla”. “Andalusia! This is going to be my next destination” – I thought immediatelly and pretending to listen to Asaf’s story, I started to create my own new one.

Travel plan seemed to be more and more clear, I kept google map constantly open, looking for new routes, wondering whether riding around Denmark is a good idea. Days were passing by, I slowly moved from Jerusalem down south to Israel, then eventually found myself on the Jordanian side of the Red See.

And then this girl came. Swiss girl named Janin happened to decide about more things that we could simply know that sunny morning when we were introduced to each other. She didn’t know that when playing this song…

…she will make me change my mind about the destination of my very first bike trip. Becasue sitting in my chair in a plane from Tel Aviv to Warsaw and listening to this song on and on again, I realized “Andalusia” is not where I want to be. Becasue I realized that my heart beats faster when I think about going back to the East, which is “the direction of birds and direction of love”. And I realized that the whole route is a route of friends – to name a few of them: Agata (Krakow), Rafal (Katowice), Magda (Walbrzych), Matthias (Vienna), Mirko (Beograd), Tajana (Zagreb)..

But Janin was another inspiration! Becasue Janin made me feel that I wanted to do it. And becasue of her and her story, I decided to start this project.

So I take my bike with me and… let the story begin!