We walked along one of the main streets. Belgrade was still overwhelming with the intensity of the noises. The lack of my presence is a big city for so long made me unable to stand all the crackles, gratings, rumbles and horns. Suddenly I saw him. Actually I saw him again. He was still there, standing at exactly the same place as yesterday, carefully keeping chestnuts warm. Sheets of waste paper ruled into cone-shapes in four sizes were placed on his left hand side. He was dressed in a checked brown jacket, wearing black hat on his head. It was already after 8 pm, so the weather got a bit chilly, even I was wearing my pink gloves.

We’ve asked him for two small portions. He gave us so much that chestnuts were almost falling out of the cones. He wrapped them in a second sheet of paper and created an additional space for shucks, so we could start eating immediately. I was as happy as a sandgirl. I was eating roasted chestnuts so rarely. I remembered how I tried them for the very first time in Portugal, in the winter many years ago. The second time was in Berlin three years ago, also in the winter, around New Year’s eve. Now came time to try how they taste in the Balkans. Delicious. 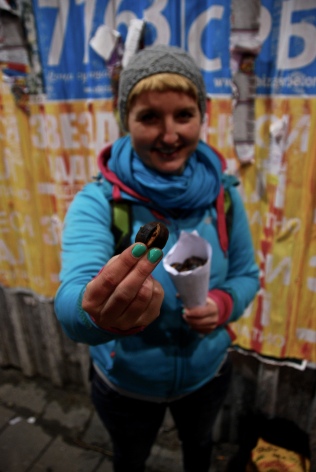 It’s kind of a ritual, “unpeeling” roasted chestnuts. Takes all your attention. They are always cracked in one place and you usually need both hands to help yourself. Or teeth. The chestnut hidden inside is warm and soft. Pure pleasure.

We kept moving forward along the street but I didn’t hear the noises anymore. I was fully concentrated on the tasty treasure in my hands.

– The guy who was selling us the chestnuts? – I asked surprised – How do you know?

– By the accent – he answered.

I started thinking about the chestnuts seller. How did that happen that he is selling the chestnuts here? Is he here on his own or with a family? Does it bring him enough money to support everyone? How many hours daily does he stand here? At what time does he finish the job? Does he manage to sell all the chestnuts every day? What happens with the unsold ones? Where does he keep his trolley? Does he take the trolley with him home, after he finishes work? Does he live far away?

My mind was floating, questions kept coming up.

– Can you take a picture of me eating chestnuts, please? For the blog, you know.. – I asked.

We took the camera out of the backpack. I found a spot where my blue jacket was matching the blue piece of the background. I poured some chestnuts from Mirko’s cornet because mine was already almost empty and I wanted to have them on the picture. We decided to focus the camera on the chestnut itself, not on me.

– Let’s take selfie with chestnuts as well – I added, still thinking about the seller, making a decision to keep coming to check on him from time to time.