I won’t tell you the story of Martina, a librarian from a small Dalmacian town Vodice. I wanted to ask what does she like in her work the most. And how did that happen that she decided to be a librarian.

I won’t tell you about Iva from Sibenik and how ESN network in Croatia is organized. I also wanted to know about the student life around, she must know all about it! And about Nina, a local journalist from the same city. I met her and her boyfriend in Zadar. We had a discussion about traveling and cycling. I wonder where traveling thinking will take her to. All I can say is that these will be beautiful places and people, for sure. If only she decides for it.

I won’t tell you about Ania, a girl from Poland organizing weddings in Croatia, for Polish couples and not only. Ania, who was the guardian angel since the day I have left. I rarely happen to be at the weddings. Actually I have been to two only in life, so that would be something to learn about. And to speak in Polish live and not on FB chats only, mmmm. And I will not tell you how how it feels like to sleep in a hotel while your cycling trip but I bet it’s very unique. Especially when the hotel tells you: “Girl, your trip is cool, we wanna host you!” and you already imagine this amazing staff and big comfy bed..

I won’t tell you about Tina, manager of a hostel in Makarska, who answered positively to my question and invited me to pay hostel a visit, even though they are closed in winter. I guess she didn’t want to leave a cyclist from Poland homeless this time of the year. Neither won’t I tell you about Tina’s parents who take care of the hostel in the winter time, in case a lost traveler like myself will unexpectedly knock to their doors. And about how their life in the slow winter season looks like. Peaceful and more focused, I bet..

I won’t tell you about Anamarija from Tucepi, a young mama, whose name I loved from the first time I saw it. And how it is to be a young mama in Dalmatia. I haven’t met a mama in Dalmatia yet. What does she like in being a mama the most. And if that’s what mostly defines her or there are other things that define her equally, or maybe even more.

I won’t tell you about Antonio from Ploce, who wrote me that this year’s winter is so warm that some trees started blossoming already. Oh, I really wanted to see those trees! I was also really curious to check if the temperature was really going to keep rising with every single kilometer cycled south.

I will also not tell you about how Mirko was waiting for me at the Croatian-Montenegro border – just as we have agreed some time ago – in order to cycle Montenegro together. And how I was really looking forward to see him and do it together. 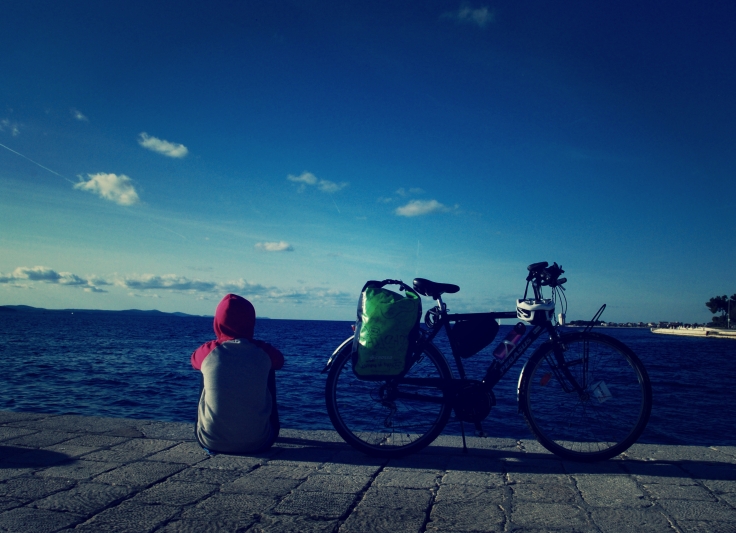 The stories were not going to happen because my knees have decided differently. Irony. Out of all unexpected that’s probably most unexpected thing that I was just not able to predict. I was wondering though that maybe the fact that the stories were not going to happen now, doesn’t necessarily mean that they will not happen on a later, different stage of this journey.

Maybe it’s sometimes  necessary to make two steps back in order to be able to make one step forward. For now I have decided to search for the stories in Belgrade and about Belgrade; look for the people to be met and places to be visited. Last time I was here was summer time four years ago. Let’s see what this year’s winter has to offer.