Maja, Goran, Borut, Simona – that is a story about my last two days in Slovenia, about how it happened that I got invited for a dinner and how I madly fell in love with this country

Last morning before leaving Kungota to Maribor, I decided to go for a trekking to a “nearby” church on a hill. Peter said it’s an hour long walk ,so I thought it will be perfect – I will see a bit more of the surroundings, catch some air and then will be back home to pack my stuff and leave. So I did. The only difference was that the way took me some 4,5 hours. But Peter was right – it was beautiful!

View from my window at Peter’s house 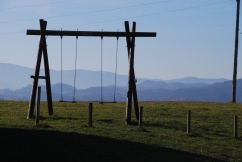 Resting at the peak! 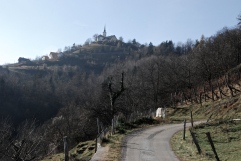 Walking around Kungota (getting closer..)

In the meantime Peter’s friend Maja texted me that she would like to invite me to the radio and whether I would agree to give an interview. I said “Sure!” beacasue every time anyone from the media invited me, I think (I hope) that maybe someone else will get inspired to make some of their dreams true. The interview was really nice, we talked a lot (I just think sometimes that I talk too much..) – even though we were in two different cities (I was in Maribor and Maja was in Lublana), so we have never ever met in person! But everything is still possible.

Goran, the technican who welcomed me at the radio, made an offer to show me around. Of course I wanted it! I’ve been to the radio quite a few times in my life, but never seen it from the inside. So we did. And the journey lasted for some time, I listened to Goran carefully until we reached Borut’s room:

Goran: Borut, please meet Kasia. She has arrived here on a bicycle from Warsaw and is on her way to Athens.

Kasia: Yes, that’s true. How about you? Where have you cycled? [this is how cyclists start their conversations..]

B: I did one big bike trip around Spain. Where do you stay here in Maribor?

K: I’m staying with a host from Couchsurfing. But I had some problems to find a host in here. Luckily Tjasa has replied yesterday and here I am.

B: Really you had problems? Have you ever tried Warm Showers?

K: Yes, I did. But I have never ever got an answer from anyone. I don’t know why..

B: No kidding! Warm Showers is the best! It’s only cyclists in there and they exactly know your needs and how you feel and that the best thing they can do for you is pasta in the end of the day.

K: Yes, I know! But what can I do about people not answering my requests?!

B: It’s impossible! Wait.. Have you sent a request to me?

[In the meantime Borut is checking his mailbox. The e-mail with Warm Showers request pops up at his screen]

B: This one is not from you?

[I’m looking at the e-mails]

K: Yeeeeees! It’s from me!! You see?!?! You have not answered as well! I’m telling you that nobody answers!

K: No worries! But now you owe me a pasta!

This is how I found my plan for the evening, during which we laughed like crazy, I pointed out maybe fifteen times the fact that Borut had not answered, but what matters most is that I met my first Warm Showerer in life and the experience was so amazing that now I really feel like meeting more of them!

The rest of the day I’ve spend wandering around Maribor, shooting some cools spots and enjoying the city’s December-almost-Christmas-not-that-cold-yet-though-luckily-for-me atmosphere:

It’s quite an invention, isn’t it?

Postal Street with a Postman in Maribor 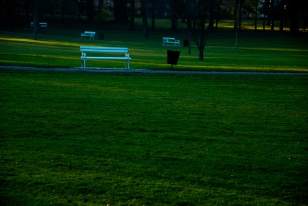 One of the most charming spots I found in Maribor (books books!) 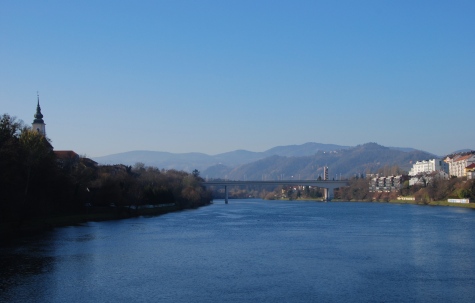 As Sunday is a good occassion enough, Peter decided to join me for my ride towards Croatian border. It’s been so cool to ride with someone! Especially with someone who knows the road and you don’t have to worry too much. It’s been so cool to ride with Peter and tell each other crazy cycling stories! This is how the first 30 kilometeres passed in two shakes!

Simona and Danilo appeared on our way out of the blue! Such a nice meeting it was! One of those moments when you suddenly find common stories with the people on your way. We have visited Ptuj together, had a coffee together, talked a lot. Simona and Danilo are cyclists themselves and they spend every weekend on the bicycles – even such cold and foggy as the last one! Extremely nice, positive, wonderful people! Gave me a ride for the next 20 kilometers towards Croatia. Thank you, guys!! 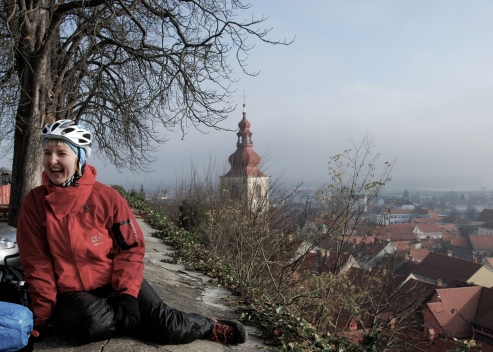 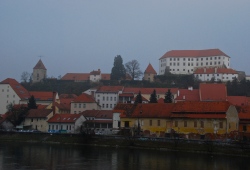 With Peter in Ptuj

The castle in Ptuj 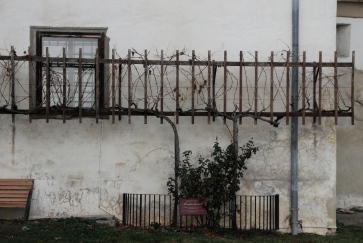 The wine at Ptuj’s castle – the oldest wine in Europe (the world?)

Simona, Danilo & Peter – such a llovely company to visit Ptuj with!

The last 30 kilometers I made on my own. And I kept thinking about how amazing this last week in Slovenia was. That I have never before met in my life anyone from Slovenia and now, in one week, I met so many amazing people! 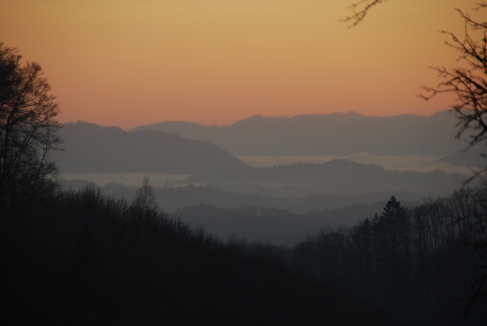 Goodbye Slovenia! I already miss you!

In the end of the day it was REALLY foggy! 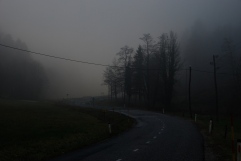 Soon afterwards I couldn’t really think a lot because after the sunset the fog was so dense that I had to wipe the back mirror almost every minute to see something and every time I blinked, I could feel how wet my eyelashes were. So actually I’m not quite sure about the way I was riding but I think it’s been rather forests and not fields as if there have been fields, I would have felt more wind on my cheeks, I guess. What I’m sure about though is that there has been a river. As I could hear it! So there are no more photos to post – becasue except the piece of asphalt one meter ahead of me, I couldn’t see anything else! Luckily I could listen to the perfect music in such circumstances: