A big smile and a shock of red hair have welcomed me in Grojec. “Hi!” – said Agata, standing in the doors – “Welcome to Grojec!”. I was so happy that it was here, becasue it meant I did it – I just cycled the distance planned for the first day. And I was allowed to take rest from now on. I smiled back and answered: “Hi!”

“Leave the bike in the garage and come home, I will show you everything”. So we did. “Are you hungry? Wanna drink something? Tea? Coffee? Water? Stewed fruit?”. “Stewed fruit!” – I answered excited. Yes, it was Agata who started this tradition that has been continue the whole long way over Poland. “I also made the dumplings with potato&spinach filling”. Oh, with every sentence I liked my stay in Grojec more and more!

Agata hosted me on my first day of the travel. Since the very begining I knew it was going to be a very special day for me. Quite magical. I would have never expected though that Agata will turn it into a super-magical one!

As a children’s book specialist (and lover) she had opened for me the world of Pomelo the Garden Elephant I have never heard about before (and made me so fascinated that just before I went to sleep, I’ve read all the books about Pomelo Agata had in her collection!). Agata admited that every half a year, when the new book is being released, she treats it as an occasion to celebrate! 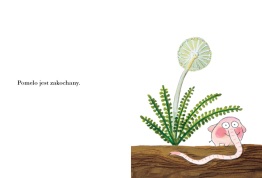 She lives in Grojec and she she enjoys it the most as that the big city life is not for her. She tried to live in Warsaw for half a year but afterwards came back to Grojec more tired than before she had left. Her dream is to own a publishing house with the books for kids. To be able to do so (and not only) she is already studying literature in Poland (almost finishing) and soon  will be studying this topic in Sweden as well.

A home for Agata is a place where fresh fragrant bedclothes are (I got such myself from her!). She sleeps in a four-poster bed with stars just above her head. It’s not surprising that she has such magical skills like making the best cocoa porridge in the world!

My morning coca porridge made by Agata

The moment I left, I felt really sad that it was already over. But she could smell that not yet. I called her 15 minutes later – the moment I realized I left the camera charger on the chair in the living room. 15 minutes after my call she appeared in the city center with the charger in her hand. A new occassion for another big hug.