It’s been almost a week since the last bike updates. Definitely the most important and the most stressful event of the week was the activation of the project on Polak Potrafi platform and concentration of all my efforts on gathering funds for my travel.

It’s been a very stressful moment and I wrote about it separately here. This moment (luckily!) is already over and now I can continue with my actions, slowly, continuosly – trying to make other people become enthusiastic about this idea as well so that they would like to support it with symbolic 10 PLN.

At the same time it’s been quite amazing that within three days I collected 1/3 of all what I need in total (at the moment I have 1650 PLN) and the project has been supported already by 21 people. It is a great start really and I would never expect so much! At the same time it doesn’t mean that now I’m going to stop working. Not at all!

The main plan for this week is to send the information to the media – maybe someone will get interested, which would make me really really happy. But if not then not, I alredy have almost 450 people “following” me on Facebook and they are the ones that did believe in this idea at the first place, when it was still very much about the idea only. Which is quite amazing itself and really makes me feel so happy and honoured by them!

The plan for the following week:

I also think that I’m also already slowly getting stressed, that there are only two more weeks in Rio, two more weeks in Warsaw afterwards and then – go! Go Girl on Bike! Well, cool cool, but actually the ball of fears is systematically growing every day..

Aha, and yesterday I ALMOST reached the bike repair workshop for girls organized by Projekt Zębatka, this time in Gdańsk. I took Peggy and we went there together with Yaelle (who visited me in Rio for the weekend). Surprisingly it turned out that Łaźnia Centre of Contemporary Art has two locations and that Damian Hirst’s exhibition was in one location and the bike workshop in totally a different one. So – I eventually didn’t make it to the workshop, but on the way back we did 45 kilometres with Peggy which was a lot of fun! And the bike repair lessons are still ahead of me. Anyone would like to train me? Please please..

With Peggy on the way to Gdańsk 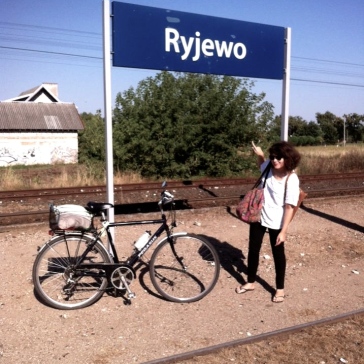 Peggy and Yaelle in Rio (Ryjewo)

chapter 1: getting ready, day by day