Yesterday was exactly one month to go (to my bike trip). It’s been already the second time of “one month to go”, so I didn’t do any special action this time. But I did my own celebration – my friend Yaelle visited me in Rio and we went to Gdańsk together, mainly to see Damien Hirst’s exhibition “New Religion” presented in Łaźnia Centre of Contemporary Art. The exhibition is tiny, presents the artpiece and a movie about the artist himself.

I didn’t know Hirst’s works until now. Maybe I’ve seen some of them but I didn’t remember. So I actually went to this exhibition with a lot of curiousity and an open mind. The entrance to the exhibition was already quite interesting: 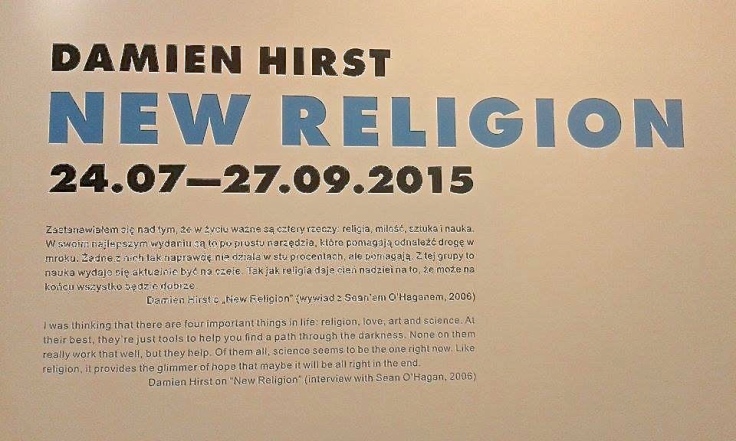 Watching the movie about Hirst, I thought about this very famous quote of Albert Einstein “Everyone knows that something cannot be done until someone comes along who doesn’t know that it’s impossible, and does it.”. And that can probably relate to Hirst’s art as well although there is a lot of artistic insolence and conviction about his own uniqeness in it.

I noted also a few other sentences from the movie:

And I actually think that this is exactly how I perceive art and why I like to go to different kind of exhibitions and art events.

Hirst is definitely not the favourite artist of mine – I can already say so. But:

Everyone can read this artpiece in a different way. I usually read art in the simpliest possible way, from my very personal perspective – built of my own experiences and the way how I see and observe the world around me. In this particular case – talking about medicine as a new religion has appealed to me a lot.

The world of Hirst’s and mine are two different ones. But somehow I was able to find in his art a piece of my world. Turning from the religion and faith into medicine and sciene is a positive turn visible in (so called) Western culture, which I’m a part of – as I was born and raised in here. We trust medicine more and more and at the same time we believe ourselves and the people around less. The doctors became new gods and the pills they “serve” are new hosts that aim in giving a relief to all our pains. It reminded me the scene from the movie “Amy” after Amy was rewarded the Grammy Award and the party was over, she was sitting sad on the stage and said to a friend of hers: “You know, it’s so boring here without drugs”.

I think that there is a lot of power in her words – the addiction to constant emotions, actions, beauty – all the emotions the Western culture is feeding us with, and inability to deal with the lack of them at the same time.

Hirst is talking about a similiar action-reaction in the context of drugs. And maybe that’s why I quite valued this artpiece of him.

The exhibition is presented in Łaźnia Centre of Contemporary Art in Gdańsk, Jaskółcza St. 1, until 27 September.